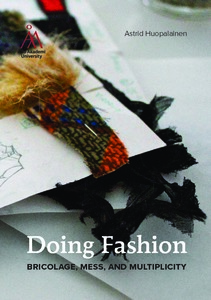 What do fashion designers do when they do fashion? How are enchanting clothing objects stitched and pieced together behind closed doors? What happens when a designer is not performing on dazzling front stages according to certain culturally determined expectations, norms or embodied scripts? We are easily seduced by the exciting surface, fantasy and magic of fashion (e.g. Evans, 2001; Moeran, 2015; Soley-Beltran, 2012; Thrift, 2008). In fact, popular readings about fashion tend to emphasize its references to consumer dreams, seduction, spectatorship and glamour (Moeran, 2015; Stacey, 1994). Meanwhile, we know less about the mundane work practices and emerging activities of (high) fashion. This thesis explores what happens in and during fashion organizing, in the broadest sense. Written at the intersection of fashion studies and organization studies, this thesis focuses on the demystification, deepening and appreciation of ordinary fashion practice and its ‘nitty-gritty-details’ (Chia, 2004, 29). Previous work on fashion has rarely paid detailed attention to the micro-level activities through which fashion’s daily organizing emerges and happens. As such, this thesis is in contrast to much of the existing theorizations of fashion that have, to a great extent, focused on ‘still’ surface, pleasure and consumption, to the degree that messy socio-material organization, embodied action and manual labour have been overshadowed.
In this thesis, I open up an intriguing empirical site for the detailed study of bricolage and organizing, phenomena that are always processual, moving, embodied-material and intertwined. Founded on a worldview that emphasizes action, multiplicity and movement (Chia, 1997), this thesis openly asks ‘what goes on in here?’ in order to capture a fashion designer’s multiple ‘here-andnow’ forms of organization. By so doing, this ethnographic study considers the varied actions, ad hoc doings and organizing practices in the affect-intensive day-to-day life of a fashion designer working in the city of Helsinki, a specific cultural context. This piece of writing builds upon previous literature on critical organizational theory (e.g. Dale, 2001; Harding, 2011; Höpfl, 2003; Phillips et al., 2014) that challenges conventional representations of organizing as abstract, disembodied and purposive actions. In my attempt to not fall back on the dualism of materiality–discourse, appearance–reality or the Goffman-esque ‘dichotomy between front-stage and back-stage spaces’ (Shortt, 2015, 655; Satama and Huopalainen, 2016), I highlight the emerging, ‘messy’ and contextual qualities of organizing that have traditionally been overlooked within the field of organization studies in favour of more linear, rational and abstract accounts.
In this thesis, I also move physically across a range of fashion’s workspaces as a researcher in order to illustrate glimpses of everyday action and fashion organizing, as these complex activities unfold over time. By closely following a designer inventing and integrating all sorts of resources – often inexpensive and improvisational ones – in order to organize himself and his work across time and space, this thesis offers deep and situated knowledge of the uncertain process of working towards the ideals of polished ‘high’ fashion. This study illustrates a designer and his team navigating complexity by regularly performing the art of bricolage in order to create affection, perfection and value in a context of great expectations, low budgets, surface manipulations, patchworks, exhaustion, and speed. The ongoing organizing in this empirical context includes never-ending capabilities to affect and to be affected, bricolage styles and practices, hard work and intense effort (Thrift, 2010), as well as improvisations, editing tricks and endless changes along the way. Rich in empirical data, this thesis shows how the stitching, sewing or piecing together of ideas, resources and materials – or the inventive manipulation and transformation of various surfaces, bodies and things – matter hugely in fashion. Fashion is essentially in the uncertain process of ‘becoming’.
This thesis creates deeper knowledge on the dynamics of organizing (in) a particular hybrid economy that builds upon endless trials-and-errors, surface manipulations and uncertain technologies of enchantment. By shedding light on everyday, exceptional and celebratory actions, this thesis captures the fusion of ‘magical’ and ‘mechanical’ aspects of the fashion organization, and develops fashion as an empirical organizational phenomenon. The close-up empirical engagement with fashion organization can be viewed as one of the key contributions of this thesis. Also, this thesis contributes valuable knowledge about organizing as emerging doings, piecing fragments and performing bricolage, a surprising embodied-material process with no predetermined start or end. Finally, this thesis challenges orthodox understandings of bricolage in the field of organization studies, and develops our understanding of fashion as a multidimensional and unfinished organizational phenomenon. Organizing ‘for’ fashion is essentially unfinished; an ongoing bricolage process of endless becoming where bodies, surfaces and materials intensely intertwine. In this context, substance and surface, image and reality, matter and mind or culture and commerce are never mutually exclusive, but always part of life and, as such, already intensely entangled and intertwined.