This Unbearable Imminence : Pre-apocalypticism in The Last Policeman, Station Eleven, and Melancholia 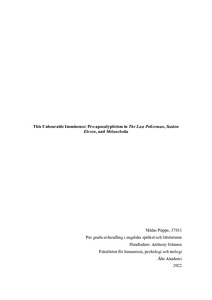 After creating an appropriate working model of the pre-apocalyptic, it was applied in the analysis of three primary texts that were characterized as pre-apocalyptic. The study examined how the apocalypse was realized in the texts, what role it served, and what relationship characters had to it. The primary texts were the novels The Last Policeman (2012) by Ben H. Winters and Station Eleven (2014) by Emily St. John Mandel, as well as the film Melancholia (2011) by Lars von Trier.

Structurally, pre-apocalyptic narratives used the same methods as other apocalyptic texts but omitted certain narrative stages and functions such as a rebuilding of society and social critique. Apocalypse was best understood as a transformative event that recontextualizes events and worldviews. Knowledge of an upcoming apocalypse was also transformative in the same way as the event itself. Reader knowledge could also define the pre-apocalyptic context just as in-narrative knowledge could. Character behavior could be understood based on psychological models that describe reactions to disaster. Pre-apocalyptic narratives also drew a parallel between the apocalypse and human mortality, which emphasized self-reflection and recontextualization.