Costs and Benefits of a Shared Digital Long-Term Preservation System 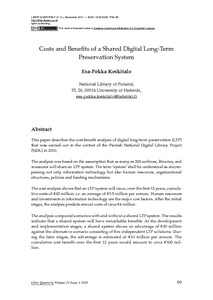 This paper describes the cost-benefit analysis of digital long-term preservation (LTP) that was carried out in the context of the Finnish National Digital Library Project (NDL) in 2010.

The analysis was based on the assumption that as many as 200 archives, libraries, and museums will share an LTP system. The term ‘system’ shall be understood as encompassing not only information technology, but also human resources, organizational structures, policies and funding mechanisms.

The cost analysis shows that an LTP system will incur, over the first 12 years, cumulative costs of €42 million, i.e. an average of €3.5 million per annum. Human resources and investments in information technology are the major cost factors. After the initial stages, the analysis predicts annual costs of circa €4 million.

The analysis compared scenarios with and without a shared LTP system. The results indicate that a shared system will have remarkable benefits. At the development and implementation stages, a shared system shows an advantage of €30 million against the alternative scenario consisting of five independent LTP solutions. During the later stages, the advantage is estimated at €10 million per annum. The cumulative cost benefit over the first 12 years would amount to circa €100 million.