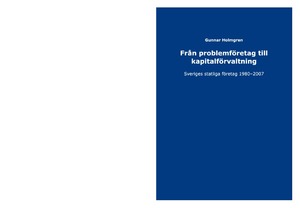 The Swedish State is a large owner of enterprises. The Swedish Government Office administers 54 companies/groups, of which 40 are wholly-owned and 14 partly-owned by the State. A total of approximately 180,000 people are employed in these enterprises. The State is moreover one of the largest owners of the Stockholm Stock Exchange. The total value of the enterprises is assessed at around SEK 750 billion.
This study focuses on the key reasons why the Swedish State has had ownership in a wide range of companies.
The study provides, with the help of earlier research, an historical review of government involvement in business. A deeper analysis of the Swedish situation is presented for the period 1980-2007.
Concrete reasons are identified, along with explanations of the development of the state–owned sector, with respect to turnover, employment, industrial structure, results and investment. The development of the rules for Corporate Governance in the State sector is explained.
This study also includes a look at the creation of State-owned subsidiaries as the means to develop and expand business.
In addition, this examination presents a systematization of important reasons why new State-owned companies will be created. A creation which must be
considered as a dynamic process over time.