From American Dream to American Reality : An Analysis of Working-Class Isolation in Bruce Springsteen’s Nebraska 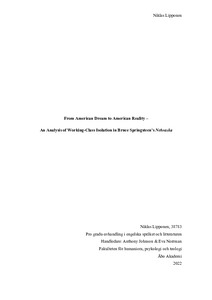 Bruce Springsteen is a significant figure in American popular culture. He is known as a chronicler of the American experience: engaging in how the political, cultural and social landscape of the United States has changed from the 1970’s onward. Most of all, Springsteen is seen as a voice of the working-class in America and a spokesperson of the importance of community. In 1982, Springsteen released his sixth studio record, Nebraska which consists of ten songs set in the socioeconomic landscape of America in the early 1980’s, when the working-class were facing economic and existential struggles caused by the worst economic recession since the Great Depression.

The aim of this study is to examine the theme of isolation in Nebraska’s lyrics: How Springsteen’s characters experience isolation, the consequences of it, and the reasons for their circumstances. The analysis was conducted by close reading with a focus on the key elements of social identity, the American Dream, place, belonging, community, unemployment, and social exclusion. To accomplish this study, I have used academic studies and critical essays written about Springsteen’s lyrics, interviews conducted with him, and factual bibliography about Springsteen’s life as well as theoretical material relevant to each key element in order to support my analysis.

The analysis indicates that isolation is a central theme in Nebraska with each key element being a contributing factor to the isolation which the characters experience. The common element on the record is that the characters feel alone and downtrodden by forces beyond their control, but each song tells a different story. There are characters that try hard to solve their problems, those who lose sight of themselves and act irrationally, sometimes with fatal results, and some who become paralyzed by their isolation and do not act at all. They are outcasts disconnected from their communities and disillusioned with the world around them.

This study provides an overview of isolation in Bruce Springsteen’s Nebraska. Song lyrics have relatively recently become academically accepted as a form of literature alongside poetry, and the research here could consequently be seen as an addition to studies in the field of song lyrics, both Bruce Springsteen’s and song lyrics in general.