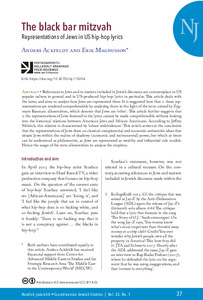 References to Jews and to matters included in Jewish discourse are commonplace in US popular culture in general and in US-produced hip-hop lyrics in particular. This article deals with the latter, and aims to analyse how Jews are represented there. It is suggested here that 1. these representations are rendered comprehensible by analysing them in the light of the term coined by Zygmunt Bauman: allosemitism, which denotes that Jews are ‘other’. This article further suggests that 2. the representations of Jews featured in the lyrics cannot be made comprehensible without looking into the historical relations between American Jews and African Americans. According to Jeffrey Melnick, this relation is characterised by ‘robust ambivalences’. This article arrives at the conclusion that the representations of Jews draw on classical conspiratorial and economic antisemitic ideas that situate Jews within the realms of shadowy (economic and instrumental) power, but which at times can be understood as philosemitic, as Jews are represented as wealthy and influential role models. Hence the usage of the term allosemitism to analyse the empirics.