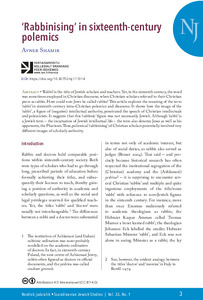 ‘Rabbi’ is the title of Jewish scholars and teachers. Yet, in the sixteenth century, the word was sometimes employed in Christian discourse, when Christian scholars referred to their Christian peers as rabbis. How could non-Jews be called rabbis? This article explores the meaning of the term ‘rabbi’ in sixteenth-century intra-Christian polemics and discourse. It shows how the image of the ‘rabbi’, a figure of (negative) intellectual authority, penetrated the speech of Christian intellectuals and polemicists. It suggests that this ‘rabbinic’ figure was not necessarily Jewish. Although ‘rabbi’ is a Jewish term – the incarnation of Jewish intellectual life – the term also denotes Jesus as well as his opponents, the Pharisees. Thus, polemical ‘rabbinising’ of Christian scholars potentially involved very different images of scholarly authority.