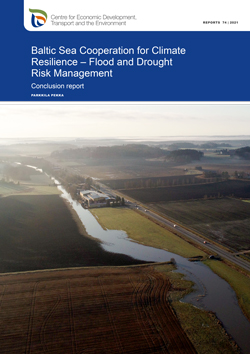 This report is a summary of the work that was done during Baltic Sea cooperation for climate resilience – drought and flood risk management -project.

Main goals of the project were twofold. Firstly, project aimed to create an overall picture on the Baltic sea nations regarding how each nation have been implementing Climate change adaptation methods on their respected areas and what are the best practices for Finland to implement. Secondly to create lasting networks between professionals on different nations to continue sharing knowledge between Baltic Sea countries. Covid 19- pandemic caused changes to the original project plans and hindered the networking efforts.

This conclusion report will present the summaries from each of the constructed reports. In the conclusions section of this report are gathered all the relevant findings and policy recommendations.