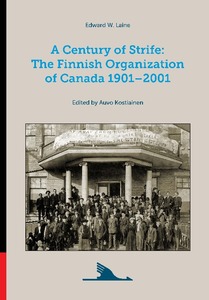 A Century of Strife: The Finnish organization of Canada was written by the Finnish Canadian archivist and historian Edward W. Laine (1940–2003). The study was almost completed by Laine, and has been accordingly edited by professor Auvo Kostiainen for publication by the Migration Institute of Finland in Turku.

Canadan Suomalainen Järjestö, the Finnish Organization of Canada, has been active from 1901. It has been one of the central organizations for Finnish immigrants in Canada with politically leftist sympathies. The volume explains the Finnish Canadian history as an integral part of Canadian statehood. Laine discusses the realities of the immigrant life concentrating especially on the turbulent periods in Canadian history of World War I and World War II, at the time when pressure was heavy towards the immigrants and their status in the country was questioned.

All these and many other transnational aspects are carefully considered by Laine, who also writes a more general analysis of the pos-World War II decades, a time when the immigrant population had created new generation, and the new immigrants with differing, more educated background began to pour in.